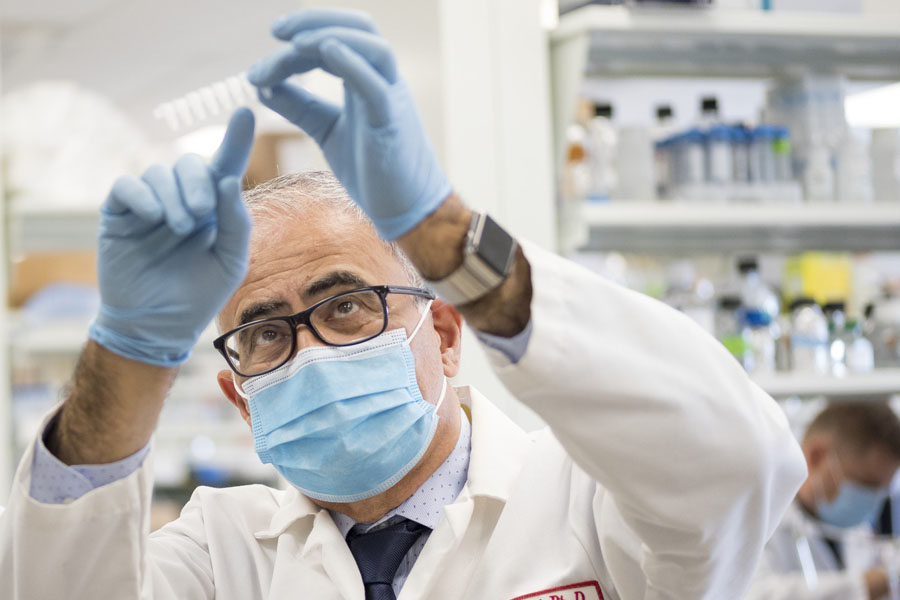 Since its discovery in 1981, HIV has proven a particularly challenging puzzle for scientists all over the world. How do you fight a disease that hides in its host’s cells, entwining itself in their very DNA? Multitudes of researchers have devoted entire careers to learning everything they can about human immunodeficiency virus (HIV) — the virus that causes AIDS — and searching for ways to eradicate it.

Some 40 years later, science has made great progress: Antiretroviral treatment (ART) has significantly reduced the burden of disease, essentially transforming it into a chronic condition that can be effectively managed for many patients. But for millions of people across the planet who are unable to access ART, or who don’t even know they’re infected, HIV can be a death sentence.

What’s needed is a cure. Something that can eliminate HIV from cells without causing added harm to the patient. And that’s what a team led by Kamel Khalili, PhD, along with Jennifer Gordon, PhD, Tricia Burdo, PhD, Ilker Sariyer, DVM, PhD, and Rafal Kaminski, PhD, and other researchers at Lewis Katz School of Medicine at Temple University are on the road to achieving this milestone.

This advance is possible thanks to an exciting innovation known as CRISPR. Borrowed from bacterial defense mechanisms, CRISPR technology uses an enzyme called Cas9 to allow scientists to alter and manipulate genes. Essentially, they can “edit” DNA, cutting and pasting to remove or turn off unwanted genes, or introduce new ones.

Dr. Khalili and his team recognized early on that CRISPR technology has incredible potential in medicine, and started investigating it in relation to HIV. First, they used CRISPR to edit HIV-infected cells in vitro (isolated in a laboratory). Next, they turned toward mice augmented with human immune cells infected with HIV; the technology successfully eradicated the virus.

Again, they were able to eradicate problematic genes without causing other changes to the primate’s genomes, suggesting that CRISPR may indeed be an effective pathway to ridding people infected with HIV of the virus without harming them.

The next step will be seeing how the technology performs in human clinical trials.

The Path to Potential Global Impact

Should this research succeed, there’s no understating how groundbreaking it would be. In essence, it would represent a cure for HIV, the holy grail of so many scientists. What’s more, it would fulfill the Temple scientists’ goals of designing a cure that would be accessible to those hardest hit by the virus, in parts of the world where ART is not easy to come by.

The CRISPR technology is low-cost, designed to have no side effects, and can be delivered in one shot with no refrigeration necessary.

It’s shaping up to be the breakthrough the world has been awaiting for decades. And it’s just one of many breakthroughs born right here at Temple.

Dr. David Koren emphasized the importance of patients and providers working together and patient empowerment in treatment and decision-making.

Wired Article Continues Coverage of the Role of Drs. Kamel Khalili, Tricia Burdo and Their Teams at the Lewis Katz School of Medicine in Breakthrough Gene-Editing Therapy Being Administered to a Human with HIV for the First Time

Wired interviewed Dr. Khalili and Dr. Burdo and highlighted their research over the years that led to this news.