With age, the human heart gradually loses its ability to repair itself following injury. Damage wrought by injuries such as cardiac ischemia and heart attack, which are associated with decreased oxygen levels in the heart, can cause the heart to function below normal capacity, making it difficult for patients to carry out day-to-day activities.

To augment heart repair after ischemic injury, researchers have turned to stem cell-based therapies, which replace dead heart tissue with new, functional tissue. In most cases, however, fewer than 1 percent of stem cells survive transplantation into the heart, due primarily to the cells’ inability to cope with the metabolic demands of the ischemic environment.

Now, in new research, scientists at the Lewis Katz School of Medicine at Temple University show that, at least in mice, this obstacle can be overcome through the reintroduction of LIN28 – a protein normally expressed in the developing heart – into stem cells derived from adult heart tissue. LIN28 renders adult cardiac stem cells more metabolically flexible, greatly improving their chances of survival. 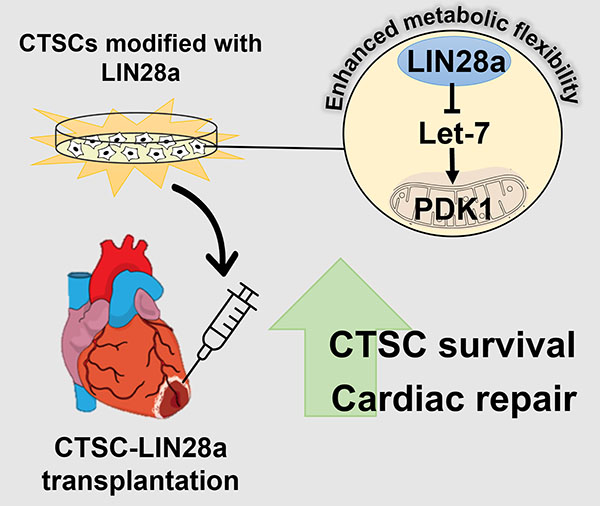 “LIN28 is very active in the developing heart, but not in the adult heart,” explained Mohsin Khan, PhD, Assistant Professor of Cardiovascular Sciences at the Cardiovascular Research Center at the Lewis Katz School of Medicine and senior investigator on the new study. “We found that when we expressed LIN28 in cardiac stem cells from adult heart tissue, the adult cells were reprogrammed to have metabolic characteristics of young, developing heart cells. The process was essentially like reverse aging.”

The new findings were published online in the journal Redox Biology.

The fetal heart is specially adapted to function under low-oxygen conditions. Post-natally, this low-oxygen tolerance is lost, however, and by adulthood, the heart is extremely sensitive to decreases in oxygen availability. Changes in cellular metabolism are the underlying reason for this shift, and recent studies suggest that these metabolic differences in the heart help determine the fate of stem cells following transplantation.

In the new study, Dr. Khan and colleagues were interested in finding out whether metabolic regulators that are expressed in the developing heart could impart a sort of metabolic flexibility to cardiac tissue-derived stem-like cells (CTSCs). CTSCs are present in both neonatal and adult heart tissue but only express LIN28 in the developing heart. In adult heart tissue, CTSCs possess regenerative potential and generally are dormant.

The team began by reintroducing LIN28 expression in adult mouse CTSCs in vitro and analyzing the effects on signaling pathways involved in cellular metabolism, growth, and regeneration. They found that LIN28 expression produced a robust regenerative response, modifying CTSCs to promote growth and survival in response to oxidative stress. The researchers linked the modifications to the Let7/PDK1 signaling pathway, which is known to regulate aerobic metabolism in cells. Transplantation of LIN28-expressing CTSCs into the heart in mice that had suffered heart attack resulted in significant improvements in cardiac structure and function. These effects were mediated via the same pathways identified in the in vitro assessments.

“LIN28 modified energy production in CTSCs, leading to the secretion of many factors that are beneficial for heart cell survival,” Dr. Khan explained. “Overall, the cells took on a more youthful phenotype.”

Dr. Khan plans next to translate the new findings into a larger animal model and to determine whether human-derived cardiac stem cells can be reprogrammed by LIN28. “These studies could have important implications for how we approach stem cell therapy for heart disease in humans,” he said.

The research was supported in part by grants from the National Institutes of Health and by funding from the W.W. Smith Charitable Trust.

Coverage of the Coronavirus Pandemic for the Week Ending May 20th