The Truth About Lap Band Surgery

Why the procedure isn’t effective for long-term weight loss

Weight-loss surgery is a big deal, so it’s important to know all you can before making the decision. There are several surgical treatments available for weight loss — each with their own benefits and risks — including Roux-en-Y gastric bypass, gastric sleeve (also known as sleeve gastrectomy) and lap band (also known as adjustable gastric banding).

We offer all of these procedures except for lap band. Why? Keep reading to find out.

The popularity of lap band surgery has declined in the United States since its peak in 2008. Many patients have reported complications and limited weight loss following the procedure.

The curiosity surrounding lap band surgery is likely because it’s a fast, minimally invasive, outpatient procedure. As with all bariatric surgeries, the gastric band procedure is designed to help a person lose weight. Here is a basic breakdown:

2. Lap band is not as effective as other weight-loss surgeries.

Studies have consistently shown other procedures are more effective than gastric banding.

Short-term results for lap band patients seem positive, but over time people may experience weight gain or other complications, such as band deterioration or slippage, both of which require follow-up surgery. In fact, it’s been shown that between 15% and 60% of people with lap bands require re-operation.

Gastric bypass and gastric sleeve surgery — both offered at Temple Health — are an effective and proven way to lose weight and improve other co-morbidities, such as blood pressure and diabetes.

3. You have to change your eating habits with a lap band.

People with a lap band will have to change what and how they eat.

Since the lap band decreases stomach size dramatically, the amount of food a person can consume becomes limited. It’s important for people with a lap band to eat slowly and stop when they feel full. Overeating can cause stomach pain, nausea and vomiting.

The lap band diet means you will have to avoid high-calorie foods, particularly those with large amounts of fats, carbohydrates and sugars (this includes sugary drinks, alcohol and carbonated drinks).

Even the way you eat has to change after lap band surgery. It’s advised to eat slowly (meals should take at least 20 minutes) and to only swallow food once it’s smooth. This is because the opening of the new stomach pouch is small, and large chunks of food can block the area.

4. Lap band does not last forever.

A lap band will eventually have to be replaced or removed.

Medical devices often have a shelf life, including the lap band. Many patients have the band removed because it slips off or deteriorates to the point of needing replacement surgery. In other cases, people choose to have their bands removed because of the strict diet, lack of weight-loss results and potentially painful side effects. 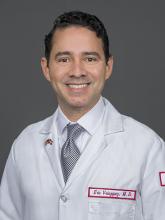 Dr. Eric Velazquez is Assistant Professor of Clinical Medicine at the Lewis Katz School of Medicine. He is Chair of General Surgery at Temple University Hospital – Jeanes Campus, where he is also Medical Director of the Bariatric Program. At the Temple Bariatric Program at Jeanes Campus, Dr. Velazquez performs surgery to help better the health of individuals affected by obesity.