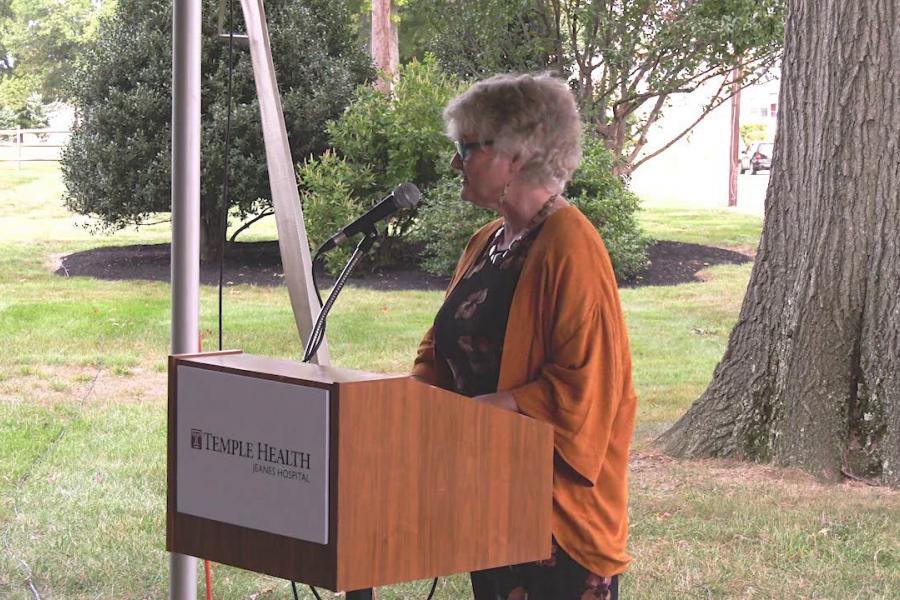 The legacy and generosity of Anna Thomas Jeanes, a Philadelphia Quaker whose philanthropy led to forward thinking in medicine and other areas of social justice, were highlighted today at the dedication of a historical marker on the grounds of Jeanes Hospital.

“More than 90 years into our existence in Philadelphia, Jeanes Hospital still embodies the Quaker legacy of compassion and holistic care that were the hallmarks of Anna T. Jeanes and others like her,” said Marc Hurowitz, DO, president & CEO of Jeanes Hospital at the dedication ceremony. “We are proud that this recognition of her legacy is installed on Jeanes campus as a reminder of the rich history of this Philadelphia institution.”

Jeanes Hospital was founded in January 1928 with 46 beds and a mission to care for “those with cancer, nervous, and disabling ailments,” according to Ms. Jeanes bequest of $200,000. The hospital has continuously served the community since then, growing in size and complexity of clinical offerings while earning quality accolades from HealthGrades, Leapfrog, U.S. News & World Report, and Consumer Reports.

Anna Thomas Jeanes (1822-1907) was a visionary Philadelphia Quaker abolitionist and activist. Her own personal experiences with breast cancer led to her hospital bequest. Consistent with her wishes, the Institute for Cancer Research was founded in 1946 on the Jeanes Hospital Campus. The Institute would merge with the American Oncologic Hospital in 1974 to become Fox Chase Cancer Center. Both entities would go on to become part of the Temple University Health System.

Jeanes was deeply affected by human suffering caused by slavery, the Civil War, reconstruction and the massive migration of people to the industrial north. She understood that with great privilege came great responsibility, and she carefully and wisely invested her efforts and resources to further her vision to lessen human suffering in a changing America. In addition to Jeanes Hospital, her bequests also funded the Negro Rural School Fund, which appointed Booker T. Washington as a trustee. The fund supported the training of black teachers, known as Jeanes Supervisors, who provided southern black youth with academic and vocational education.

“This is a glorious moment where we can celebrate the legacy of a woman who was truly ahead of her time,” said Kay Sackett Fitzgerald, a member of the Anna T. Jeanes Foundation Board, who led the effort to gain a historical marker for Anna T. Jeanes. “As a Quaker woman in the 19th century, she was quiet about her work and accomplishments, so it is fitting that we shine the spotlight on her legacy today.”