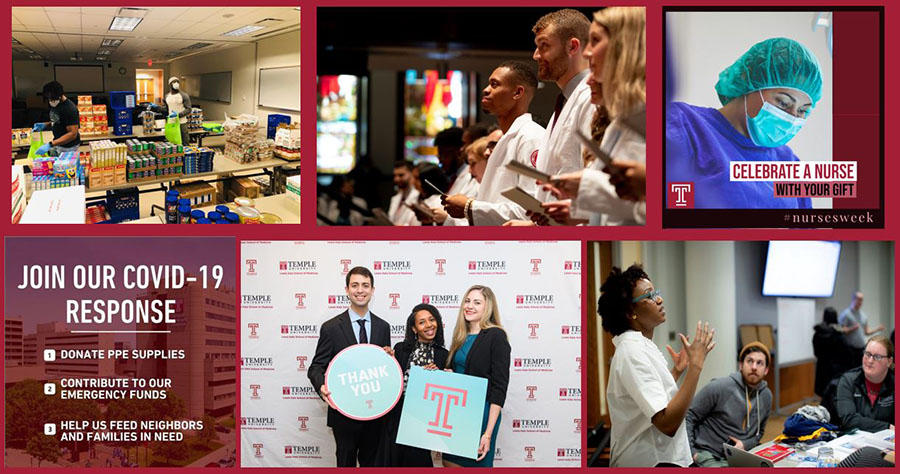 Support for research was at the heart of the more than $21 million donated to the Lewis Katz School of Medicine. A landmark $5 million gift from alumnus Gerald M. Lemole, MD, a 1962 graduate of the Lewis Katz School of Medicine at Temple University (LKSOM), and Emily Jane Lemole will establish the Lemole Center for Integrated Lymphatics Research.  A seven-figure gift from Temple University trustee, benefactor and Fox School of Business alumnus Phil Richards and the Scott Richards North Star Charitable Foundation, along with Stop Alzheimer’s Now, created the new Scott Richards North Star Foundation and Stop Alzheimer’s Now Chair for Alzheimer’s Research at the Alzheimer’s Center at Temple. ​

At a time when doctors are needed more than ever, donors to the Katz School of Medicine directed more than $5.5 million of their philanthropy to ensure that the cost of medical school remains accessible for aspiring physicians. Fifteen new endowed scholarship funds were established at the medical school in FY20, and a $1.2 million legacy commitment from Herman Hurwitz MD '62 and Sandra Hurwitz will provide a future annual scholarship to students with demonstrated financial need. Thanks to ongoing scholarship support, the Katz School of Medicine was able to distribute approximately $2.6 million in donor-funded scholarships to 258 students during the 2019-2020 academic year.

A notable six-figure gift will continue the important work of the Pincus Family Foundation Urban Health Fellowship at the Katz School of Medicine, providing junior-level health care professionals with the tools to implement innovative, community-driven, population-based health programs that improve the overall health of children living in urban, distressed communities in and around North Philadelphia.

As the COVID-19 pandemic swept through Philadelphia, supporters rallied behind Temple, giving generously in support of emergency funds at Temple University Hospital (TUH Emergency Fund and Employee Assistance Fund), and the Lewis Katz School of Medicine (Community Emergency Fund and Medical Student Emergency Fund). Buoyed by a significant contribution from superstar Pink in honor of her mother, donors contributed more than $3 million between March and the end of the fiscal year, along with countless gifts of personal protective equipment, meals and items to support health, wellness and recovery for patients, employees, students and at-risk neighbors in North Philadelphia.

Two additional landmark gifts to TUH from a grateful patient provided nearly $200,000 for the Temple Lung Center and Temple's Palliative Care program, bringing the overall fundraising total for TUH and its three campuses to more than $4.5 million for FY20. And although TUH’s marquee fundraiser - the Annual Acres of Diamonds Gala - was cancelled, many Gala sponsors, donors and regular attendees affirmed their commitment to Temple by supporting and even making additional gifts to the TUH Emergency Fund.

Fox Chase Cancer Center (FCCC) reported a record-breaking $17 million fundraising year in FY20, even with the postponement of its signature annual fundraising event, the In Vino Vita Benefit and Auction. This is a testament to the exceptional, compassionate care and research taking place at the NCI-designated comprehensive cancer center.

FCCC’s record total included two seven-figure commitments, the first, a $2.6 million commitment to support the work of the Melanoma and Skin Cancer Program. Frank and Ann Reed’s planned gift was inspired by gratitude for care and a commitment to this program’s research efforts. The second, an anonymous $1.2 million legacy gift in the form of a Charitable Remainder Annuity Trust, will ultimately benefit cancer care and research at FCCC.

Grassroots efforts and community support were an essential part of FCCC’s fundraising year. Fourteen year-old Caroline “Casey” Stone led an inspiring effort to honor a friend, raising $52,000 for patient comfort items through Traci’s Tribe and blowing past her initial $15,000 goal in support of FCCC. A robust community of friends, businesses and donors are part of an ongoing effort to provide support and resources for patients, staff and frontline caregivers during the Covid-19 pandemic.

"The Temple community’s outpouring of support during a particularly challenging time is both inspirational and energizing,” said Nina Weisbord, Chief Advancement Officer at Temple Health. “We are thankful for the many gifts, large and small, which sustain our mission and power our educational, research and clinical enterprises. Together, our donors lead the way forward.”

To help support Temple Health and this vital work for our patients, community and the future of medicine for all, make your gift today.