Learn About the Differences in Inflammatory Bowel Disease

More than 1.6 million people in the U.S. live with inflammatory bowel disease (IBD), a generic term used to describe 2 chronic conditions of the gastrointestinal tract: Crohn’s disease and ulcerative colitis.

Both diseases can cause symptoms of:

But did you know that there are also subtle differences in the way men and women experience these sometimes debilitating conditions? These differences include age at diagnosis, symptoms and developing other conditions.

As a gastroenterologist, I know how important it is to understand the differences, because your symptoms may differ from someone else you know with the same disease. Here are 4 things you should know about IBD in women and men:

1. How old you are when developing IBD is different for women and men.

2. Women can have symptoms and complications that are different from men.

For women, symptoms and complications of inflammatory bowel disease can be different than men. Women can experience issues with menstruation and may experience anemia and osteoporosis.

Abdominal tenderness/pain and diarrhea are hallmarks of IBD, but they’re also common symptoms of premenstrual syndrome (PMS). During menstruation, IBD symptoms may worsen for women.

Crohn’s disease and ulcerative colitis are characterized by flare-ups, or periods when symptoms tend to worsen. With a few exceptions, women with IBD do not have decreased fertility, though it may increase the risk of complications during pregnancy.

Women considering pregnancy can work with their gastroenterologist to treat their IBD and get symptoms and inflammation under control before becoming pregnant.

As women get closer to menopause, estrogen levels begin to drop. This can lead to osteoporosis. Women who have IBD are at risk for osteoporosis even before menopause, especially if they have experienced loss of nutrients or have taken steroids to manage flares. Steps can be taken early in life to try to minimize early bone loss and prevent complications later.

3. While men are typically diagnosed later in life, they're more likely to develop certain diseases or conditions.

Men with IBD are more likely to develop a certain type of liver disease and colorectal cancer, and can also experience sexual dysfunction.

Men are more likely than women to develop a type of liver disease called primary sclerosing cholangitis (PSC). If you’re a male and have ulcerative colitis, your risk is even higher.

Although rare, PSC is a serious disease that can lead to cirrhosis of the liver and increase the risk of liver cancer and need for liver transplantation.

People with ulcerative colitis and Crohn’s disease may be at an increased risk of developing colorectal cancer. But the risk is even higher in men than women. If found early, colorectal cancer is treatable, so patients are encouraged to get screened regularly.

Every patient is different, so talk to your gastroenterologist about the right screening interval for you.

Recent studies suggest some men with IBD may experience erectile dysfunction or a decrease in sexual desire. If you have IBD and experience sexual dysfunction, talk to your family doctor or gastroenterologist about treatment options.

4. There is ongoing research into the causes of sex-based differences in IBD symptoms.

It’s not completely understood why there are differences in the way men and women experience IBD, but research is ongoing. Studies suggest hormones may come into play, as well as genetics, lifestyle and environmental factors.

During evaluation for IBD, your provider will ask a number of questions to learn as much as possible about your symptoms, including when your symptoms started and what triggers may be causing your symptoms to flare up.

While there is no cure for Crohn’s disease or ulcerative colitis, a number of treatments are available to help keep your symptoms under control and allow you to have an active life.

If you or someone you love has IBD, make an appointment with a Temple gastroenterologist to learn about the latest therapies. 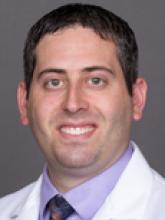 Adam C. Ehrlich, MD joined the Temple Digestive Disease Center medical team in 2014 and specializes in inflammatory bowel disease, Crohn's disease and ulcerative colitis. Dr. Ehrlich's research has appeared in the peer-reviewed journals Inflammatory Bowel Diseases, Journal of Clinical Gastroenterology and International Journal of Obesity. He has presented numerous posters and abstracts at the annual meetings of the American College of Gastroenterology and Digestive Disease Week, and is also a member of the American College of Gastroenterology, American Gastroenterological Association, and Crohn's and Colitis Foundation of America.