Wife Donates Kidney to Save Her Husband’s Life

“Your kidneys are failing,” the nephrologist told 58-year-old George P. The news didn’t come as a complete surprise to George. He’d experienced issues with his kidneys for more than half his life.

When George was 27, he went into renal failure during an especially intense workout. He was later diagnosed with rhabdomyolysis, a condition in which the breakdown of muscle tissue releases a protein into the blood that can damage the kidneys. George’s kidneys returned to normal shortly after, but he could feel the effects of the incident for the rest of his life.

I was the most comfortable at Temple. I liked the transplant team and my doctor. I really felt at home there. - George

Over the course of the next year, Antonio Di Carlo, MD, Temple’s Chief of Abdominal Organ Transplant Surgery, worked to improve George’s health in preparation for the transplant.

Along the way, George’s wife, Isabel, learned that she was a match, allowing her to donate her kidney. “She’s the healthiest person I know. She’s also a saint,” George says. “But if there was any risk involved for her, I didn’t want her to do it.”

Isabel was counseled on the procedure and recovery by the Temple transplant team. On each occasion, she was assured that she didn’t have to proceed if she wasn’t completely comfortable doing so. At home, she and George also did a fair amount of online research, mostly reading firsthand accounts of donors, which, George says, were overwhelmingly positive.

George and Isabel were also encouraged by the clear benefits of living kidney donation, which has revolutionized kidney transplantation. Short- and long-term survival rates are significantly better for living-donor transplants than they are for deceased-donor transplants. Plus, there’s usually no issue with living-donor kidneys adapting to their new bodies.

Today, 2 years from his successful kidney transplant, George has added 40 pounds to his once slight frame, and he’s working out a few times a week. 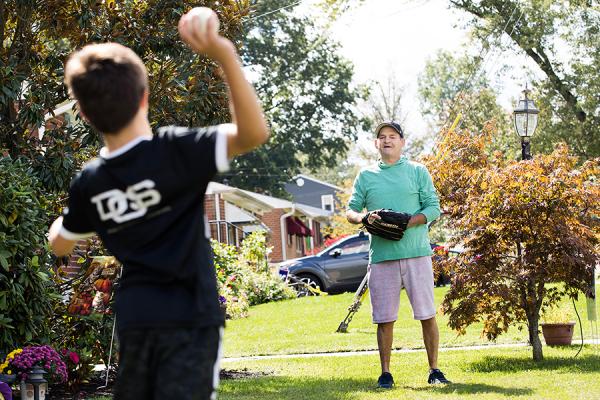 George says that he had some medical issues that needed clearing up before he was transplanted, but he impressed Dr. Di Carlo with his progress.

Two weeks after the transplant, Isabel was almost back to feeling like her normal self. At the 3-week mark, she returned to work.

“She’ll be 50 in July, and she’s still very much the picture of health,” George says. “We share our story all the time. No one ever believes she went through the surgery, because she’s so fit and energetic.”

“I can’t thank Dr. Di Carlo and Temple enough. I’m forever in their debt,” George continues. “I feel like I have another family. After the transplant, I went back to the hospital 3 times a week for routine follow-ups. Everyone from the receptionist to the doctors I passed in the hallways knew who I was and asked how I was doing.”