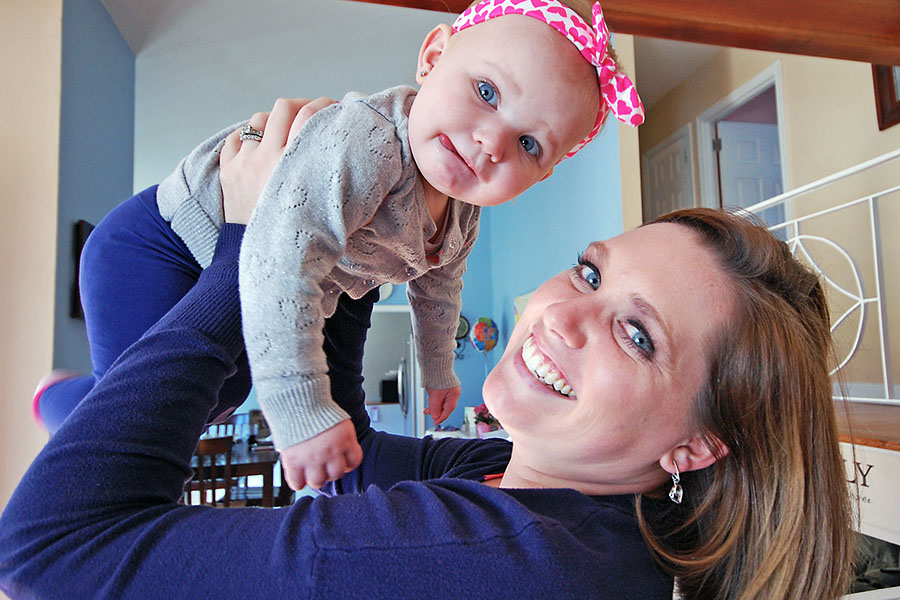 Breathing easier after treatment for a rare diagnosis

Dana Green was an otherwise healthy 31-year-old mother of two when she had her first symptoms of idiopathic subglottic stenosis (ISS), a rare condition of unknown cause in which inflammation below the vocal cords causes a progressive narrowing of the airway, making it extremely difficult to breathe.

At the time, Green thought her breathing problems were caused by a cold. “I would get so out of breath that I couldn’t play with my kids, so my doctor put me on over-the-counter allergy medication and then inhalers,” she recalls. “When that didn’t work, I was sent to an ENT specialist and had surgery on what he thought was a deviated septum.” But her breathing trouble didn’t subside.

After a frustrating year of endless medications and allergy and pulmonology tests, she was referred to Temple where she saw Ahmed M.S. Soliman, MD, Director of Temple’s Voice, Airway and Swallowing Center, and Associate Director of the Temple Head & Neck Institute. Incredibly, Dr. Soliman was able to preliminarily diagnose Dana with ISS just by hearing her breathing and coughing in the waiting room.

“After examining her throat, I saw that her airway was so narrow that she needed surgery very quickly,” says Dr. Soliman, who has a special interest and expertise in airway stenosis. “If a patient with ISS goes undiagnosed, a simple cold can cause respiratory arrest. And if someone tries to intubate them, they would either not be able to, or they could cause a life-threatening tear in the larynx or trachea.”

Green was in awe of the speed and accuracy of Dr. Soliman’s diagnosis. “I had been going to different doctors for more than a year trying to figure out what the problem was. I was in Dr. Soliman’s office for five minutes and he diagnosed my problem and scheduled me for surgery.”

Five days after Green’s diagnosis, Dr. Soliman performed a minimally invasive endoscopic procedure, which uses a laser to make small cuts in the inflamed tissue. Those cuts kept the tissue from tearing while Dr. Soliman used a saline-filled balloon to push the tissue back and open the airway. Medications were also injected and applied to decrease the likelihood of recurrence of tissue inflammation.

Green noticed the difference as soon as she woke up from surgery. “I was like, ‘I can breathe!’” she recalls. “After the surgery, I was carrying my then two-year-old son and my four-year-old said, ‘Mommy, you can carry him now!’”

Dr. Soliman notes that some patients, including Green, have recurrences of this condition that require additional procedures, but that overall it is a very effective method to address ISS. “Though we don’t currently know the cause of ISS, we’re hopeful that research currently taking place will help determine the best therapy for the 1 in 400,000 patients who develop it yearly,” says Dr. Soliman, who is part of a group of researchers that maintain an ISS patient registry. “There are multiple steps to our research, but first we are looking at how these patients are treated, which can vary greatly from institution to institution.”