Winding and twisting like a labyrinth, the brain consists of an elaborate network of passages through which information flows at high speeds, rapidly generating thoughts, emotions, and physical responses. Much of this information is relayed by chemical messengers, or neurotransmitters – like dopamine and serotonin.

Although fine-tuned and evolved for complex processing, the brain and its neurotransmitters are vulnerable to hijacking by chemical substances, including opioid drugs such as oxycodone, psychostimulants such as cocaine, and alcohol. Chronic use of any of these substances enhances the activity of a molecule known as the kappa opioid receptor (KOR), which is active in the brain's reward circuitry. KOR activation produces dysphoria and an inability to feel pleasure. Its enhanced activity following chronic drug or alcohol use plays a crucial role in substance abuse.

KORs have been known to exist in certain brain regions, particularly those involved in pain processing, reward, and stress responses, but new work at the Lewis Katz School of Medicine at Temple University (LKSOM) shows that these receptors actually are distributed widely throughout the brain. The Temple researchers made this discovery after lighting up the brains of mice using a technique called CLARITY followed by three-dimensional (3D) fluorescent imaging. The study is the first to apply the imaging technique to better understand opioid receptor localization across the whole brain in 3D images. 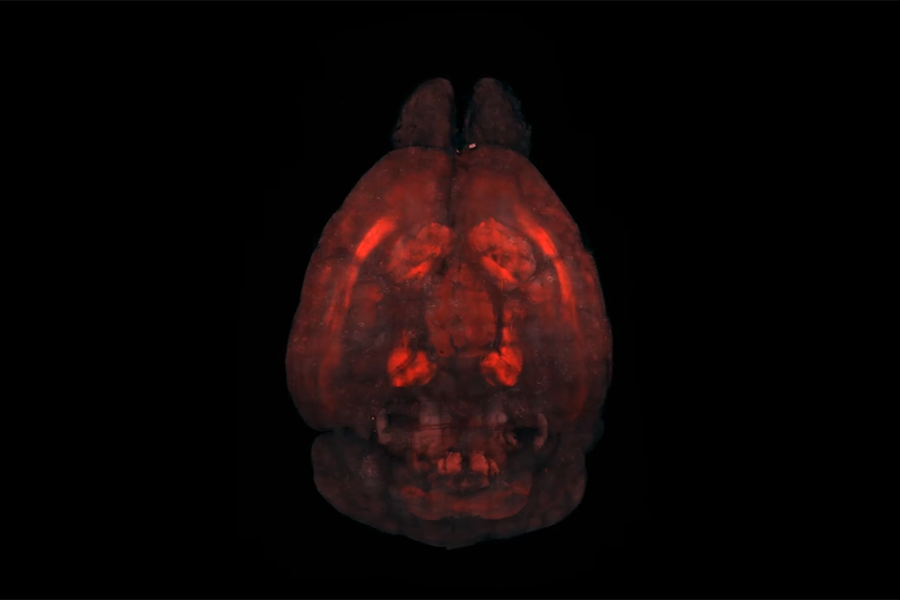 “Typically, we look at the brain in sections, thus yielding two-dimensional (2D) images, in which case we are not really able to see get a big picture view of protein distribution,” explained Lee-Yuan Liu-Chen, PhD, Professor in the Center for Substance Abuse Research and Department of Pharmacology at LKSOM and senior investigator on the new study. “But with CLARITY we are able to produce 3D images of the entire brain, as a whole organ, and this allowed us to expose the full extent of KOR distribution.”

The study was published online in the journal eNeuro.

The CLARITY technique renders brain tissue transparent, enabling researchers to visualize fluorescent probes linked to a protein of interest, in this case KOR. Fluorescence emitted from the probes is then detected via confocal imaging methods to yield highly detailed 3D images of the specific protein's distribution in the whole brain.

Seeking to gain a deeper understanding of KOR localization in the brain, Dr. Liu-Chen and colleagues applied CLARITY to preserved brains from mice that had been engineered to express a fluorescent tag known as tdTomato on KOR proteins. Upon imaging, very specific regions of the KOR-tdTomato mouse brain lit up a bright shade of red, revealing the 3D distribution of KOR throughout the brain. The researchers then examined 2D sections of brain tissue to gain detailed information on the spatial localization of KOR at the cellular level.

The 3D analyses and observations from brain sectioning enabled the researchers to map out the specific places of KOR expression. They identified extensive tracts related to pain and reward, building on existing knowledge of KOR's relevance to these pathways, and they discovered many neural tracts not previously known to express KOR.

“Seeing KOR in 3D space led to the realization that the receptor is expressed in areas of the brain beyond those that had been described before,” Dr. Liu-Chen said. “The function of KOR in these additional neural circuits is unknown.” A major goal for the team now is to figure out what KOR does in these newly identified circuits.

The success of the team's approach in itself is significant and could open doors to the study of other neurotransmitter receptors in the brain. KOR and other opioid receptors are types of G-protein coupled receptors (GPCRs). “No one has done a 3D study of GPCR distribution in the brain before,” Dr. Liu-Chen said. “The approach we used is a very useful tool and could be applied to study many different types of GPCRs and other proteins across neural tracts.”