Not unlike a sticky residue or oil congealed onto the surface of a pan, infectious bacteria in the human body have a tendency to coalesce, forming a strong, almost impenetrable layer known as a biofilm. Biofilms that form in the human body tend to be harmful – from films of bacteria on teeth that cause tooth decay to communities of bacteria that colonize medical implants, resulting in infections that are often extremely difficult to treat.

Now, in new research, scientists at the Lewis Katz School of Medicine at Temple University (LKSOM) show that at least in the case of systemic lupus erythematosus, biofilms also have the potential to aggravate autoimmunity. The research, published in the November print edition of the journal Arthritis & Rheumatology, is the first to show that components of biofilms that form in the urinary tract can serve as an autoimmune trigger, inciting flare ups of lupus symptoms. Such flare ups, or flares, are a major cause of illness, hospitalization, and death among lupus patients.

“Biofilms in general are strengthened by a protein known as curli amyloid, which forms complexes with bacterial extracellular DNA (eDNA) and makes biofilms almost impossible to eliminate,” explained Roberto Caricchio, MD, Chief of the Section of Rheumatology, Director of the Temple Lupus Program, Professor of Medicine and Microbiology and Immunology at LKSOM, and senior investigator on the new report. 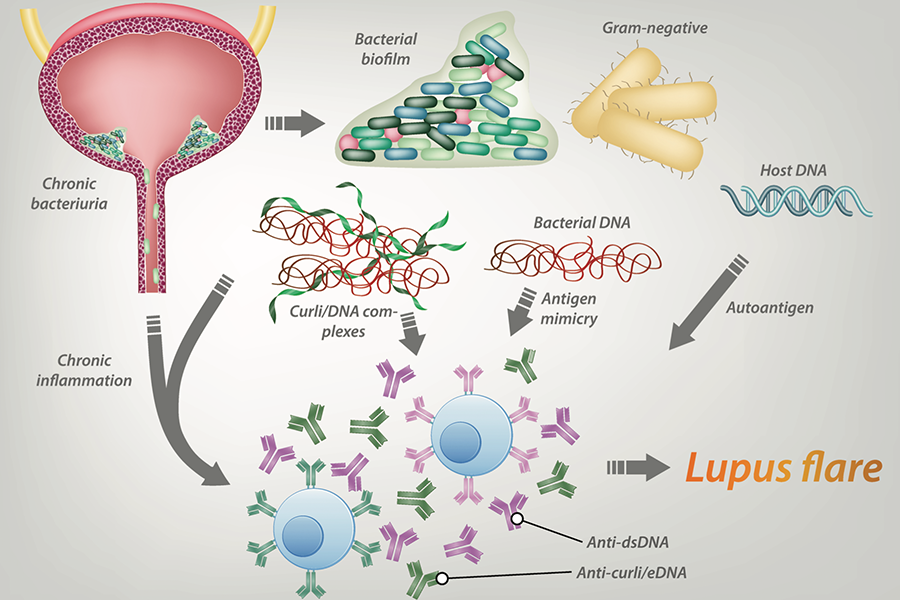 “Our latest findings indicate that eDNA and curli together are a perfect storm for lupus patients, whose immune systems are weakened and susceptible to factors that worsen inflammation and cause flares,” Dr. Caricchio said. Flares involve measurable increases in disease activity, marked by the worsening of symptoms and in some instances by the emergence of new symptoms.

Flares are triggered by various factors, including emotional and physical stress, injury, and infection. Currently, flares can be only partially treated.

In previous work in mouse models of systemic lupus erythematosus, Dr. Caricchio and colleagues Stefania Gallucci, MD, and Çagla Tükel, PhD, Associate Professors in the Department of Microbiology and Immunology at LKSOM, demonstrated that urinary biofilms appear to be especially harmful when it comes to autoimmunity. In colonies of Escherichia coli bacteria, curli amyloid naturally forms complexes with eDNA, triggering lupus-like autoimmune reactions in mice.

“Our next question was whether curli/eDNA complexes similarly induce autoimmunity in humans with lupus,” Dr. Caricchio said.

The findings reveal a clear link between chronic occurrence of bacteria in the urine, which usually is considered benign, and more frequent flare ups of lupus. This link suggests that control over bacterial infection could help prevent flares.

“Generally speaking, there is no way to predict flares or stop flares from happening, there are no biomarkers to monitor,” Dr. Caricchio said. “Our work indicates that bacteria levels in the urine may be reliable indicators of flare onset and that flares can potentially be controlled also with modification of the urinary microbiome.”

The research was supported by funding from the National Institutes of Health and the Lupus Research Alliance.