Visits to Temple University Hospital were becoming routine for James Wagstaff-Duncan, who was first diagnosed with cardiac problems seven years ago. “At one point, I was in the hospital every other month,” he notes. But when James was admitted to Temple University Hospital on August 19th, with fluid accumulation and severe heart failure, there was no mistaking the gravity of the situation. “The doctors didn’t beat around the bush,” he says. “They said that without an intervention, I had probably four to six months to live.”

James’ caregivers are even more blunt. “His heart function was not good enough to sustain him,” explains Eman Hamad, MD, Medical Director of the Mechanical Circulatory Support Program. “We were running out of ways to help him.”

A transplant was off the table, because no donor heart would be large enough to adequately pump blood throughout James’ body; weighing 480 pounds at admission, he was morbidly obese. “He wouldn’t have left the hospital without a mechanical heart,” remarks Rene J. Alvarez, Jr., MD, Vice Chief of Cardiology and Medical Director of the Heart Failure/Cardiac Transplantation Program. “And he probably would not have survived.”

But thanks to the teamwork and creativity of TUH clinicians, James is very much alive. And he plans to stay that way: “I need to get my life together and do better. I got a chance.”

Life wasn’t always this challenging. James, who lives in North Philly, used to be active, working at TUH and the University of Pennsylvania as a security guard. (His mom, Tracey Duncan-Slaughter, currently serves the hospital in Security and Patient Relations roles.) 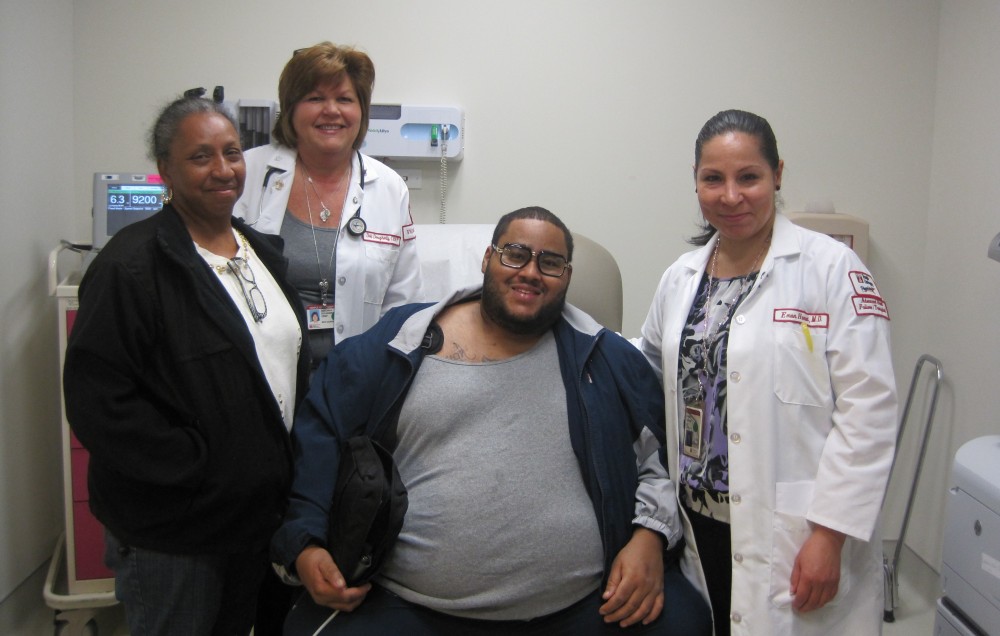 A car accident in 2008 left James with a broken leg. Already 320 pounds, he wasn’t able to walk, and his weight began to increase while his heart function deteriorated. By 2011, James’ heart function was so low that he needed a defibrillator, and he had to stop working. He kept getting bigger, fluid kept building up, and his ability to move diminished; by the time he was admitted to TUH in August, walking more than five steps left him breathless.

James needed a replacement for his failing heart, but his size meant that finding a suitable match was impossible. Bariatric surgery to reduce his weight was also out of the question, both because James’ heart was too weak to undergo an operation with sedation, and because he was not able to keep up with a diet or exercise to lose the initial weight that the bariatric team required in order for him to be a candidate. Something had to give.

A Bridge to Recovery

Only one option seemed to make sense: a Left Ventricular Assist Device (LVAD). This implanted pump steers blood directly from the heart’s left ventricle to the aorta, distributing it throughout the body. It is powered by batteries hooked up to an external controller through ports in the patient’s abdomen.

An LVAD would provide a way to restore James’ function by giving him enough cardiac output to meet his body’s demand. It would also enable him to exercise, helping him shed some bulk, which in some cases has led to improvement in cardiac function. “For him, it could be a bridge to a new life as he can lose weight, have bariatric surgery, and eventually qualify for a heart transplant if his cardiac function does not improve,” explains Dr. Hamad.

There was just one problem: The LVAD is not regularly used in patients as large as James. On the body mass index scale, a score of 30 signifies obesity; even after losing weight in the hospital, James had a BMI of 65. Only one person in the United States with a higher BMI has received the device. “Many centers in the country would not have considered putting an LVAD in,” observes Dr. Alvarez.

The device was not without its risks. James could develop an infection or bleeding, the wound might not heal properly, or a stroke could occur. But, according to Dr. Hamad, “For him, it was the only option.”

The implications stretch beyond just this one case, adds Dr. Alvarez: “We’re seeing more and more obese patients with heart failure; we have to try to help. We felt very strongly that if we pushed the envelope a bit in terms of how to treat this patient, we might be able to help others.”

A Long Road Ahead

After review and approval by TUH’s multidisciplinary Transplant Selection Committee, James underwent surgery on September 11th to implant the LVAD by Yoshiya Toyoda, MD, PhD, Chief of the Division of Cardiovascular Surgery, Co-Surgical Director of the Temple Heart & Vascular Institute, and Vice Chair of the Department of Thoracic Medicine and Surgery; and Jesus Gomez-Abraham, MD, cardiothoracic, cardiac transplant, and VAD/artificial heart surgeon.

Dr. Gomez-Abraham reports that the procedure was successful and within days, a still-intubated James was posting selfies from the ICU on Facebook. The LVAD has a lifespan of up to seven years, and should create enough blood flow to support exercise. “I’m very glad that we did help him,” says Dr. Gomez-Abraham. “I thought this man deserves the chance.”

By all accounts, James is faring well. Shortly after his surgery, he was pleased to be able to walk laps around the nurses’ station. After his October 8th discharge from TUH, he strolled around the Cheltenham Mall.

Now that Temple has done its part, James realizes that he needs to take the reins. He’s trying to stick to physical therapy and exercise along with a new diet of 1,500 calories per day. He’s also meeting every week with a TUH psychologist to help shake the food addiction that caused so much trouble in the first place. Key to staying on track is the support of his family, including his doting mom and his great-aunt Edith Bond, who says she’s got his back and whom he calls “The General” for her fierce commitment to making sure he adheres to treatments and attends appointments.

James, who turned 29 the week after his release from the hospital, knows just how important it is for him to step up. “I have to lose more weight and take care of the equipment,” he says. “Otherwise, if I gain more weight, this would be a waste of time. And I don’t want that.”