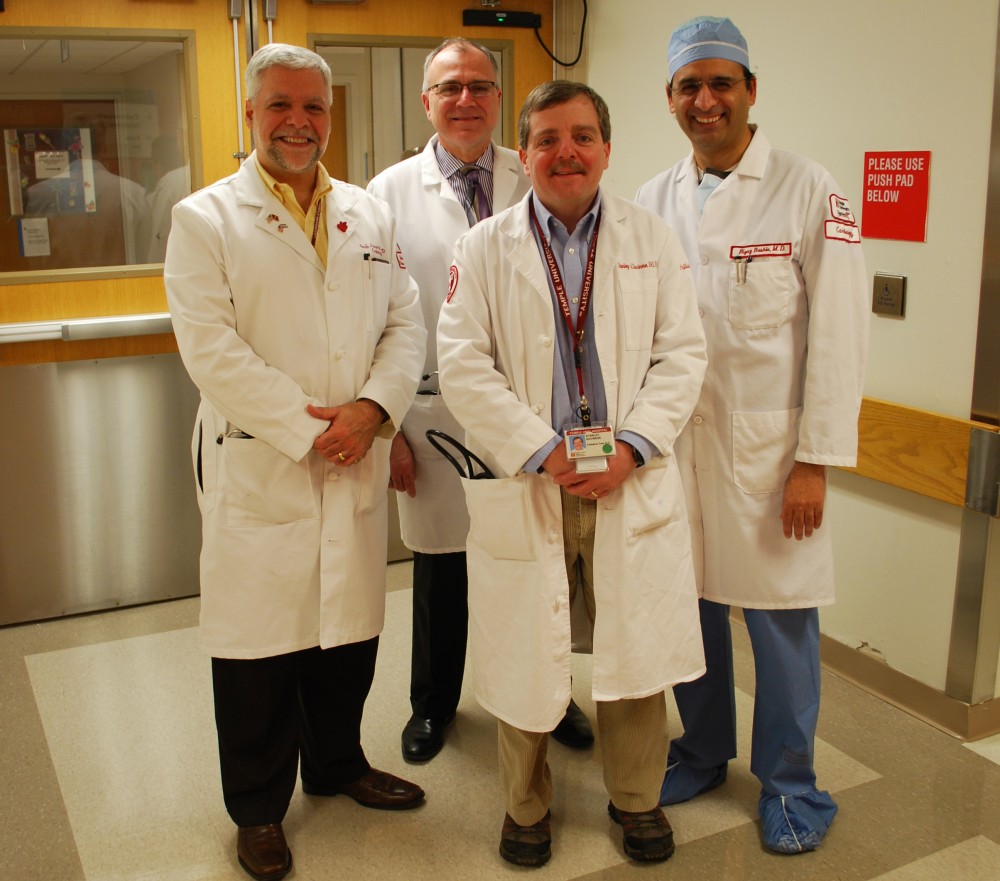 Paper hearts, stuffed animals and boxes of chocolates were far from the mind of one Temple doctor last Valentine's Day.

Fifty-two-year-old Stanley Savinese, DO, FAAHPM, a physician with Temple's Palliative Medicine Department, is fortunate to be healthy one year after a heart attack almost claimed his life.

Now, he shares his story of what it feels like to experience a heart attack and how Temple’s fast-acting care team saved him.

I was about to meet with a patient's family when the pain first surfaced in my chest. It felt like a dull twinge. After a few minutes, it subsided, and I chalked it up to stress. Not long after, as I sat alongside members of my Palliative Care team, it struck once again – this time with a vengeance. I felt like I was going to faint or vomit, so I told my team that I needed to step out of the meeting for a moment.

My first thought was to go home and sleep the pain away. Luckily, Temple is a pretty big hospital and as I walked toward the stairs, the pain began to spread out of my chest and into my jaw and left arm. I was becoming short of breath and started to perspire. At that point, I changed my mind and headed into Temple's Emergency Department instead. The first person I saw worriedly asked, "What is wrong with you?" I replied, "I think I'm having a heart attack."

Every physician, every nurse, every care provider in the area instantly snapped into action. But for me, it was as if time stood still. Someone yelled, "What room is open?" Someone else said, "19" and hopped out of her desk chair, sat me down in it and rolled me to room 19. Within seconds I was hooked up to an EKG, which confirmed that I was having a heart attack (I was later told it was the worst EKG they had ever seen in the Emergency Department). I was hooked up to several IVs, had my blood drawn, and received aspirin and Plavix.

The Emergency Department resident was next to me the entire time, telling me everything they were doing, and assuring me I would be okay. He wrote my wife’s phone number on his arm so he could call her (but ended up leaving a message and calling again to reach her soon after. She later told me he was very nice and very professional, and put her at ease even though it was a very tense situation).

The cardiology fellow arrived within a few minutes and got my consent for the procedure and made arrangements for me to go to the Cath Lab. As I was being transported there, Temple's Chief of Cardiology, Dr. Dan Edmundowicz, was by my side telling me that I was going to be okay, despite the sheer pain I was experiencing. I've had seven kidney stone operations, suffered from both appendicitis and meningitis, but the pain from this heart attack was radiating at a much higher degree than I ever thought possible.

Dr. Riyaz Bashir, in Interventional Cardiology, met me in the Cath Lab and quickly described the procedure that he was about to do. A catheter was placed in my right wrist, which hurt (but not at all compared to the chest pain), and it showed a 100% blockage of my right coronary artery due to plaque and an acute clot, as well as significant blockages of several other arteries. There was no time for a sedative, or anesthesia, or more pain medicine before the procedure. Within a few minutes, the pain had subsided. The clot was removed and a bare metal stent had been placed. I felt my muscles relax.

Hospitals strive to get heart attack patients to life-saving treatment in the Cath Lab as quickly as possible. I think I set a new record: seven minutes, door to balloon! It was like magic after the stent went in – I went from feeling like I was going to certainly die, to feeling fine, within a few minutes.

Later, in the CICU, Dr. René Alvarez, Temple's Vice Chief of Cardiology, and his team checked my catheterization site, changed my drug infusions, drew blood, monitored my heart with EKGs and checked my blood pressure frequently. That night, I had trouble sleeping as reality sunk in: I had a heart attack, and my dear colleagues who I walk past in the halls every day were able to save my life in the nick of time.

I stayed in the hospital for one more night and was released on February 16, 2013. My wife picked me up and drove me to our home in Ridley Park, PA, to rest and recuperate. A few weeks later, I visited Dr. Edmundowicz in his office and was cleared to go back to work. I passed my stress test, had a good perfusion rate, and did not need bypass surgery – just medication and lifestyle modification.

Since his tumultuous time as a Temple patient, Dr. Savinese has lost nearly 30 pounds, eats more wholesome meals and takes daily walks. He hasn’t felt a stitch of chest pain, and spends his days sharing the joy of living alongside his wife Kirsten, 19-year-old daughter Emily, and 13-year-old son Isaac – that is, when he's not comforting his Palliative Care patients at Temple.

"Every day that I wake up and see my wife and children, and take care of my patients, I'm reminded how thankful I am for the doctors, nurses, and staff at Temple. It is because of them that I am here to talk about it," says Dr. Savinese. "This is where you want to be if you're facing a serious medical condition – at least in my humble opinion!"