It was becoming harder and harder for Robert H. to breathe. The ever-thickening mucus and inflammation in his airways were not responding to treatments. It was confusing his doctors.

A referral to the Temple Lung Center led to a diagnosis of tracheobronchomalacia (TBM), a very rare condition that essentially causes the trachea to collapse.

It was a relief, because Robert was beginning to wonder how much longer he could go on.

Over the previous 4 years, it had become harder and harder for him to clear the mucus from his airways. What was a nuisance at first became more serious with each passing year.

By the fall of 2018, he was having coughing fits that lasted for 2 hours. And he was barely sleeping. Even when he did manage to drift off, he woke shortly after, choking on mucus.

Robert eventually had to retire because he was too exhausted to continue working every day. This from a guy who took pride in never missing a day of work. But his body was betraying him.

A Diagnosis at Last

Robert’s pulmonologist prescribed intensive courses of prednisone and nebulizer and inhaler treatments. It was hoped the combination would thin and loosen the mucus, and reduce the inflammation in his airways. But it had little, if any, effect.

Looking for an answer, Robert’s pulmonologist shared the results of his latest bronchoscopy with specialists at the Temple Lung Center, including William B. Shapiro, MD. It was Dr. Shapiro who diagnosed Robert with TBM.

The Temple Lung Center has the only dedicated TBM Program in the Philadelphia region. The rare condition is often associated with a chronic respiratory infection and airway obstruction. There’s no known cause, but it’s likely that genetics play a part.

Dr. Bakhos spent one-and-a-half hours with my wife and me during my initial consultation. He said the nebulizer treatments and inhalers weren’t going to do much for me. But if he could rebuild my trachea, he thought that would solve the biggest part of my problem.

During the complex surgery, Dr. Bakhos basically built “scaffolding” around Robert’s trachea with a biocompatible mesh. 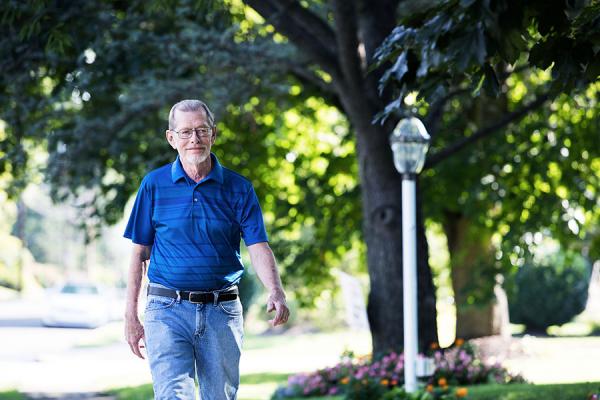 From the moment after the surgery, there was no mucus. There was no more coughing or choking, either. Everything had stopped. And Robert says that it has stayed that way since. The surgery should be a permanent solution.

"Because this condition is so rare, a lot of my treatment prior to the surgery was guesswork," Robert explains. "No one seemed to know what to make of me for 4 years. But they didn’t have the experience. Temple did."

Robert returned to Temple for a routine follow-up a few weeks after his surgery. Again and again, he was approached by familiar faces, all thrilled to see him looking so much healthier.