That was the short amount of the time Temple’s Maura Sammon, MD, was given to organize and staff a medical clinic for Afghan refugees arriving at Philadelphia International Airport in September.

As the Director of Global Health for Temple and the Medical Director of the independent Global Response Management, Dr. Sammon has extensive experience with treating refugees. But the prospect of developing a clinic that could potentially see thousands of patients within a matter of days was a daunting prospect even for her. 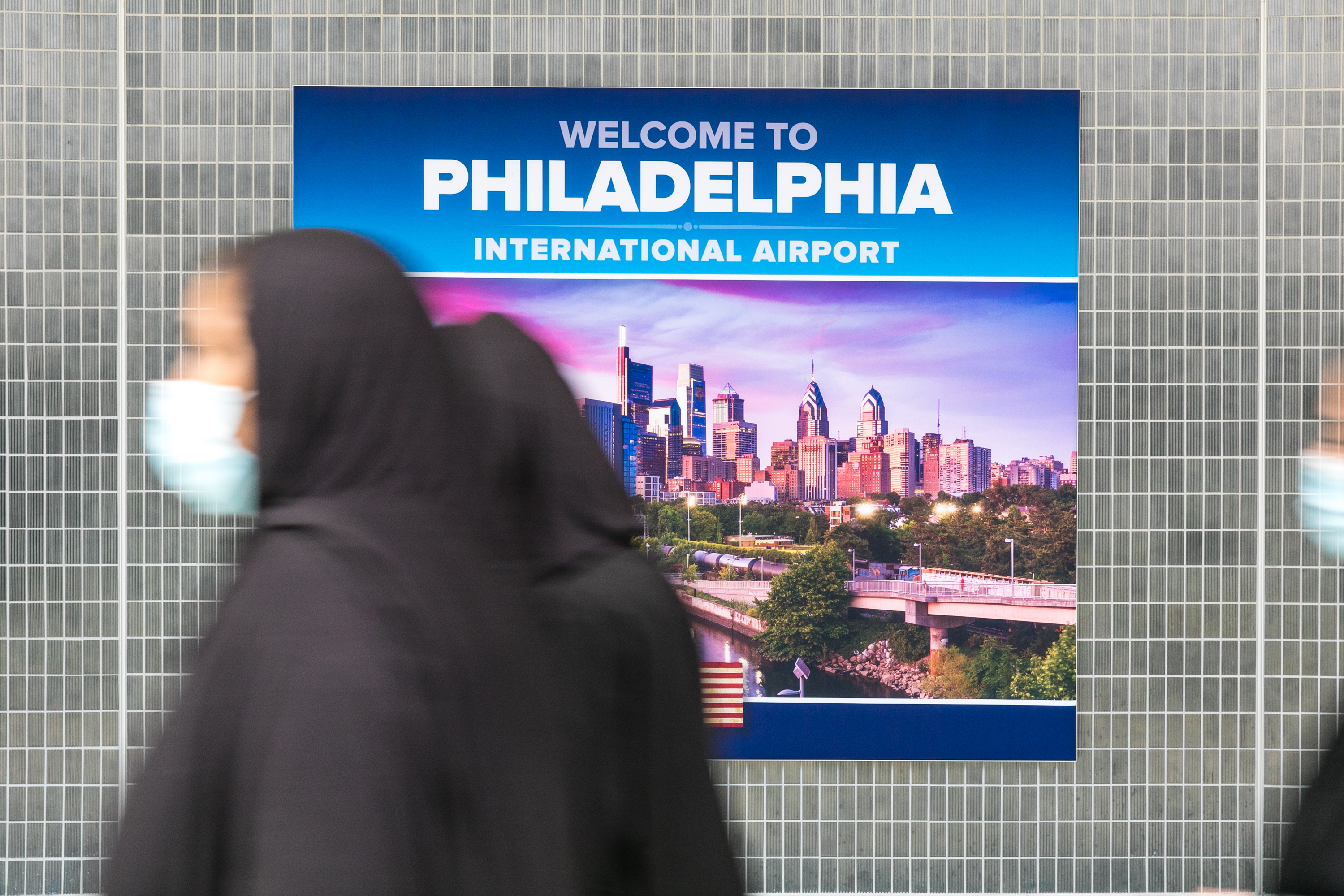 “Most of the little prep time we had was spent coming up with a basic formulary and tests that we could run based on the ease of obtaining things. We tried to keep the formulary flexible: drugs that could be used for multiple indications and tests that could be done bedside,” says Dr. Sammon, who is also Associate Professor of Clinical Emergency Medicine at Temple. 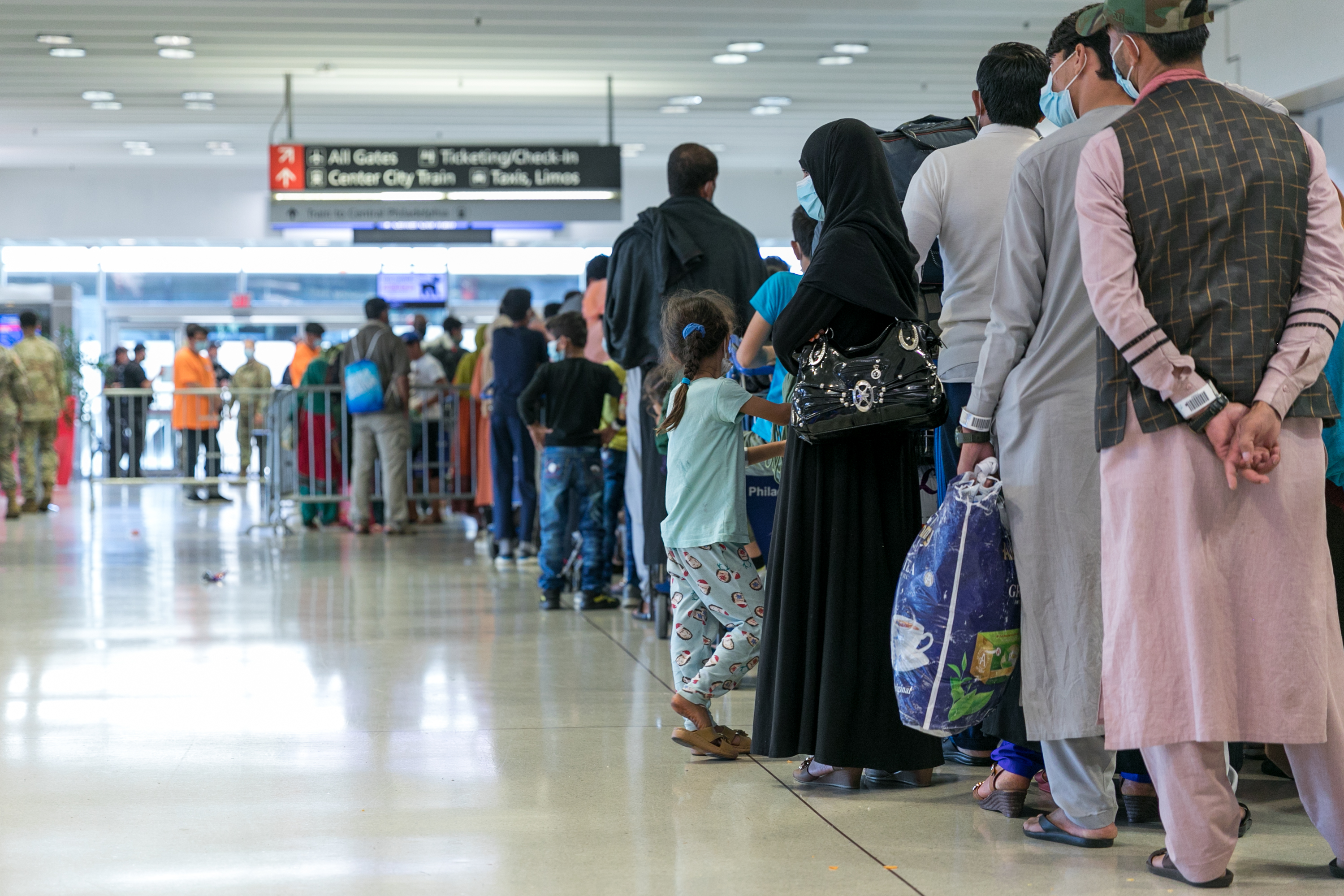 Over the next two weeks, just under 1,000 people passed through the clinic. Some needed little more than a refill of their diabetes medication. Others were treated for traumatic injuries, including a few who sustained gunshot wounds during their chaotic escape. 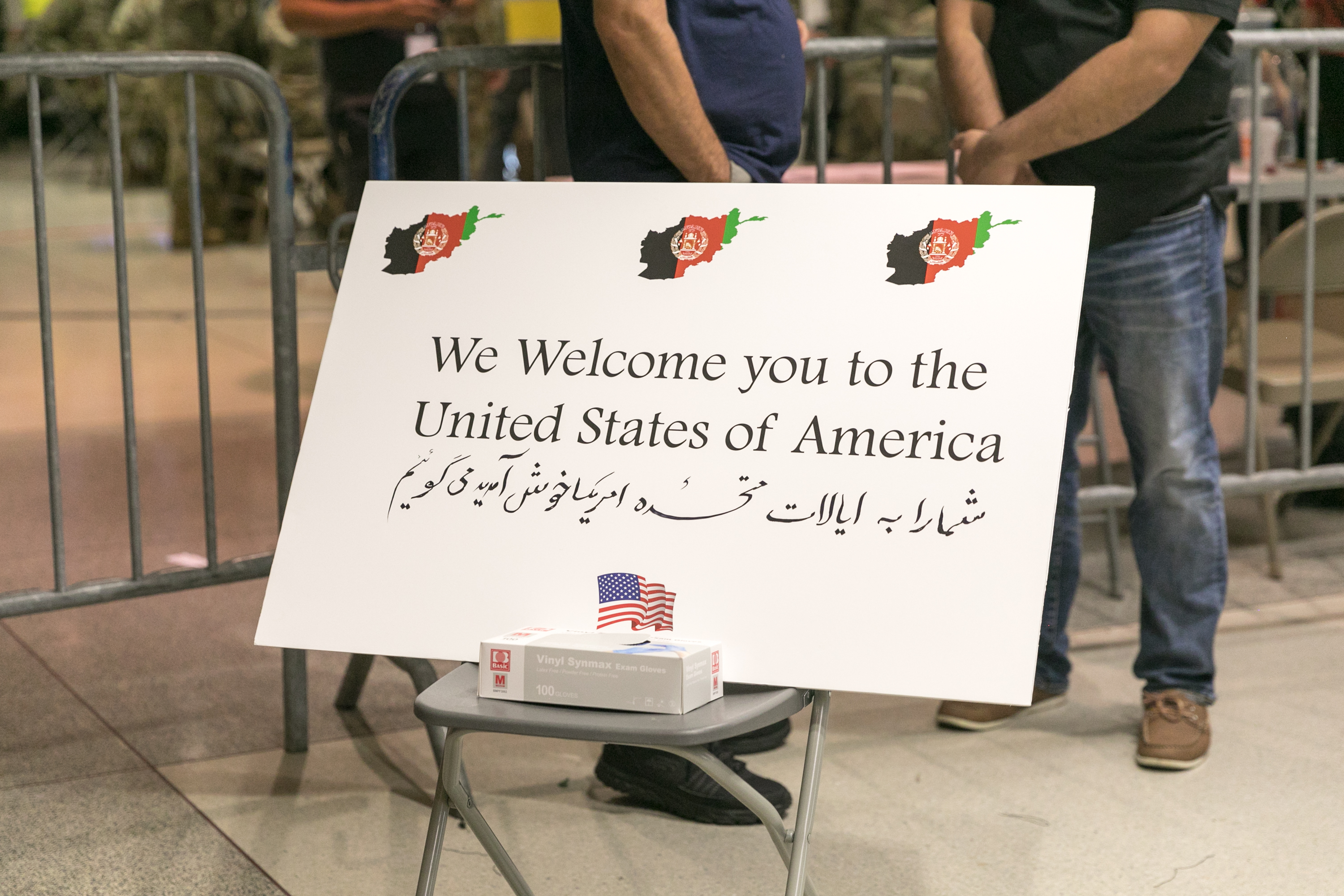 “The goal was to get the refugees out of the airport as quickly as possible,” adds Alexander McGinley, MD, Adjunct Clinical Assistant Professor of Emergency Medicine at Temple. “In some cases, that meant delaying their medical care until they were in a safer setting.”

As overseas U.S. military bases filled to capacity with Afghan refugees and American expatriates evacuated in August from an increasingly volatile Afghanistan, the U.S. government redirected flights filled with evacuees stateside. First to Dulles International Airport, in Washington, DC, where healthcare providers were overwhelmed within a couple of weeks, and then to Philadelphia.

The local response was initiated by the Philadelphia Department of Health.

“In planning for this, we realized it was infeasible for the city to handle it on its own. Normally, we’d turn to the Philadelphia Medical Reserve Corps – a group of more than 2,500 volunteers who assist the city during public health emergencies and large-scale responses – but they’ve been inundated because of COVID,” says James Garrow, Director of Communications for the city’s Department of Health. “So we reached out to area hospitals for help, and Temple responded resoundingly.” 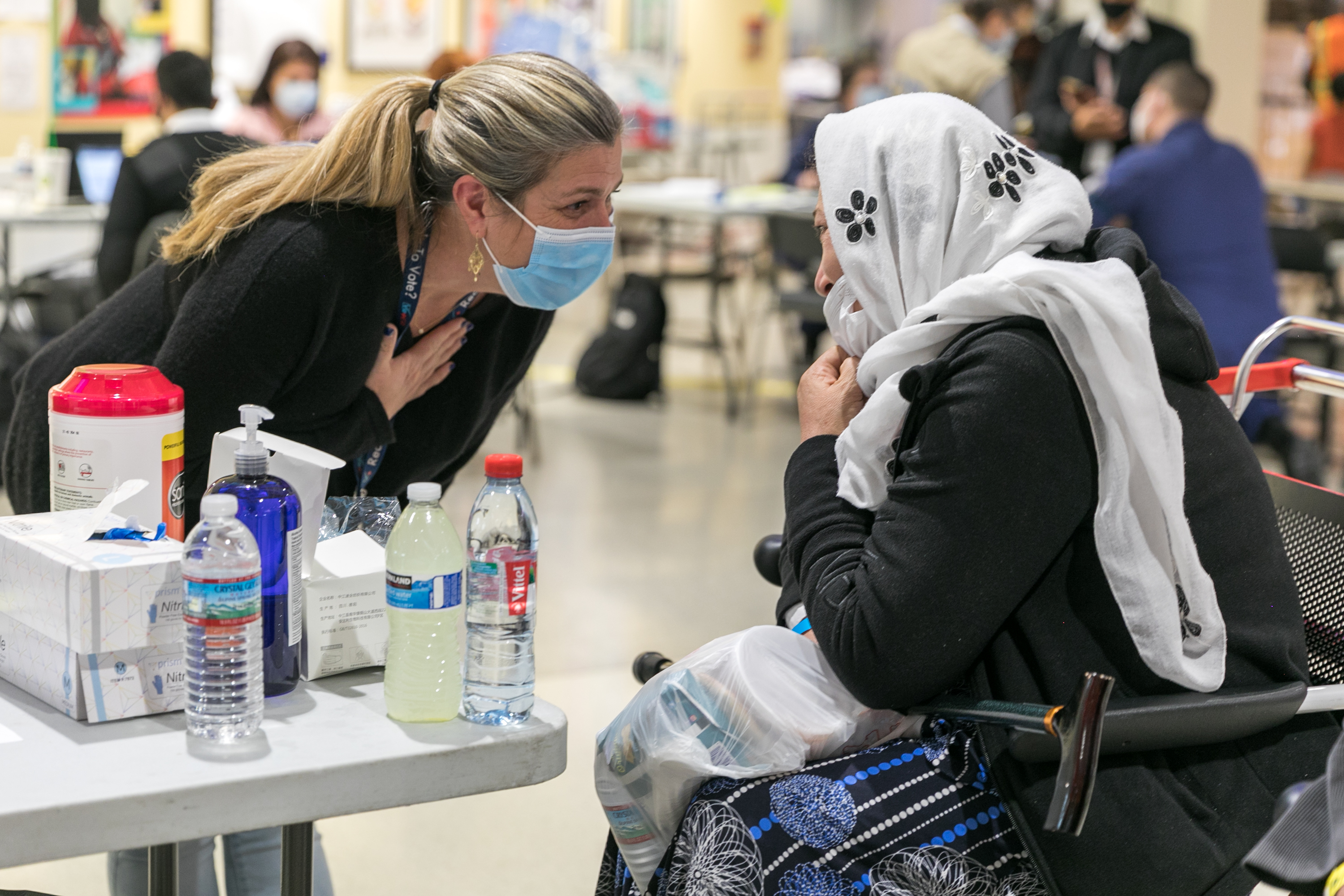 As the Director of Global Health for Temple and the Medical Director of the independent Global Response Management, Dr. Sammon has extensive experience with treating refugees. But the prospect of developing a clinic that could potentially see thousands of patients within a matter of days was a daunting prospect even for her. 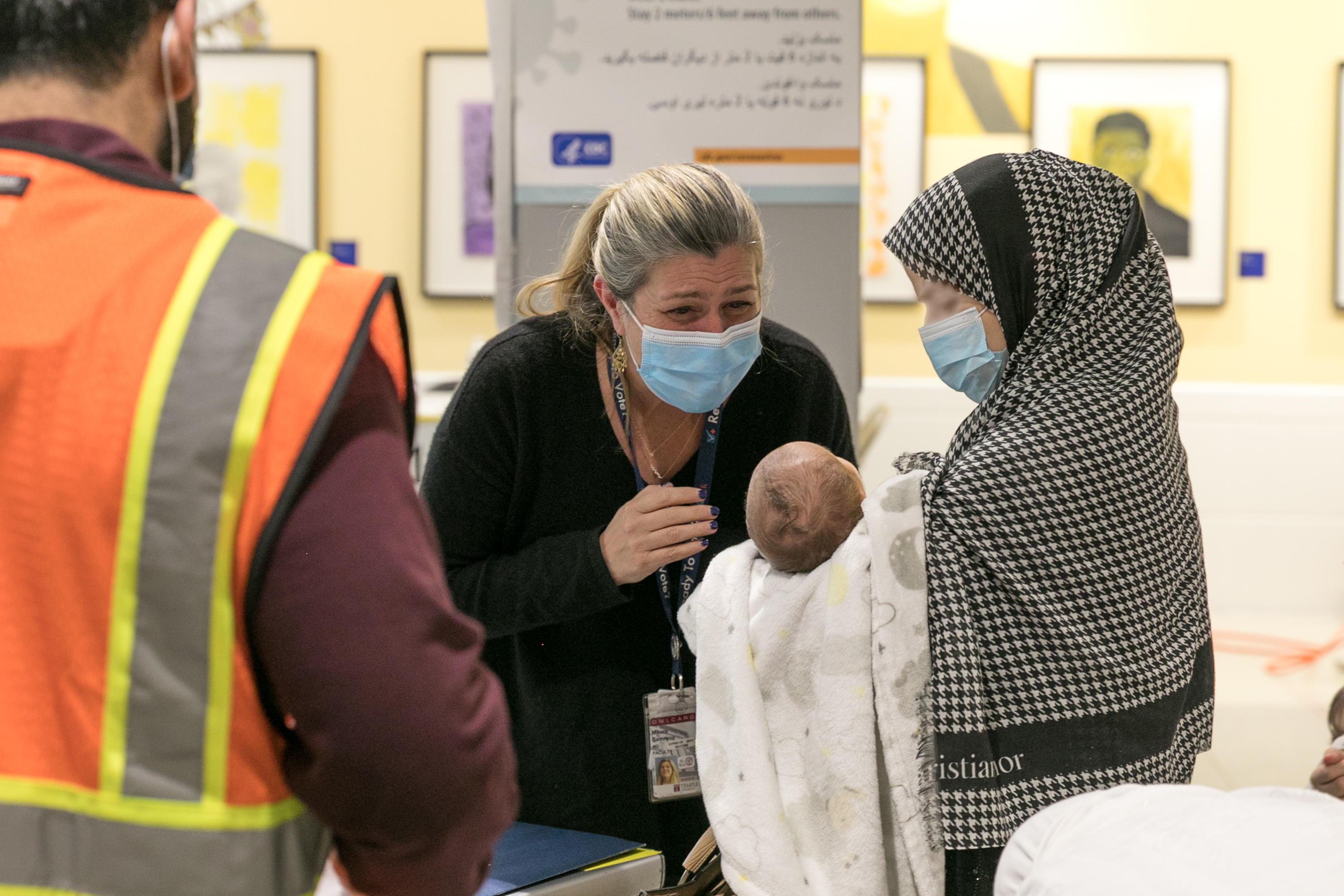 Once a staffing model was developed, Naomi Rosenberg, MD, Assistant Professor of Clinical Emergency Medicine, recruited physicians from Temple Health and other hospitals in and around Philadelphia. In all, about 150 doctors volunteered, including several dozen from Temple, many of them from Emergency Medicine and Family Medicine. They were supported by Temple nurses and medical students. Temple pharmacists also played an integral role.

“I’m proud to work for Temple,” Dr. Rosenberg says. “It was the first institution to respond, and it’s been the institution that’s run this effort. That’s consistent with my experience with Temple. It’s always been a place that steps up to help anyone in need, regardless of their circumstances.”

The first flight of refugees arrived on Aug. 27. The schedule from that point ebbed and flowed unpredictably. 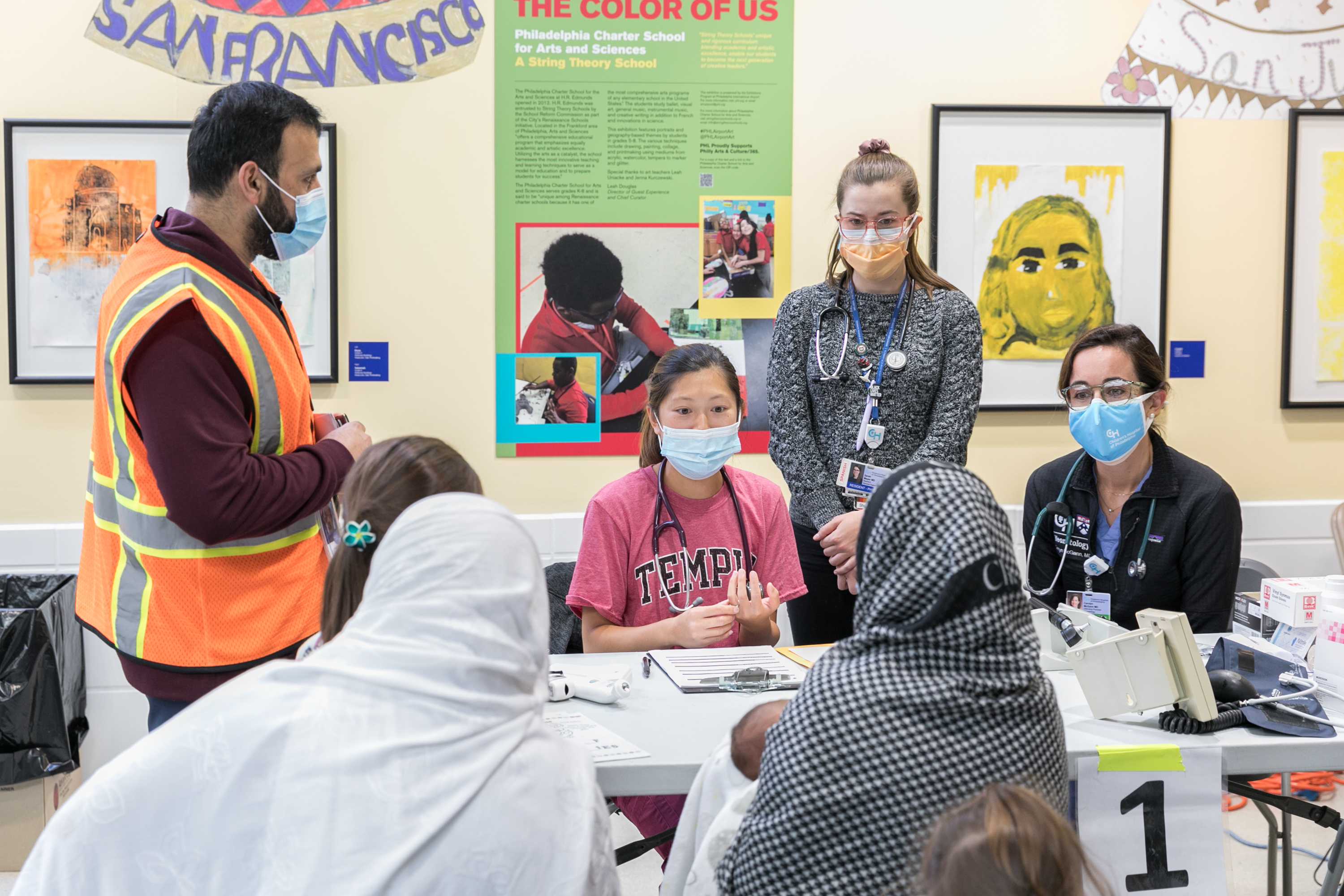 “We’d get a schedule, but it changed constantly. Flights were cancelled and added all the time,” Dr. Sammon says. “So, some days we would see a few hundred people and other days 1,000. One of the most challenging parts of this has been having no idea what volume we’re going to be seeing or when it will end.” 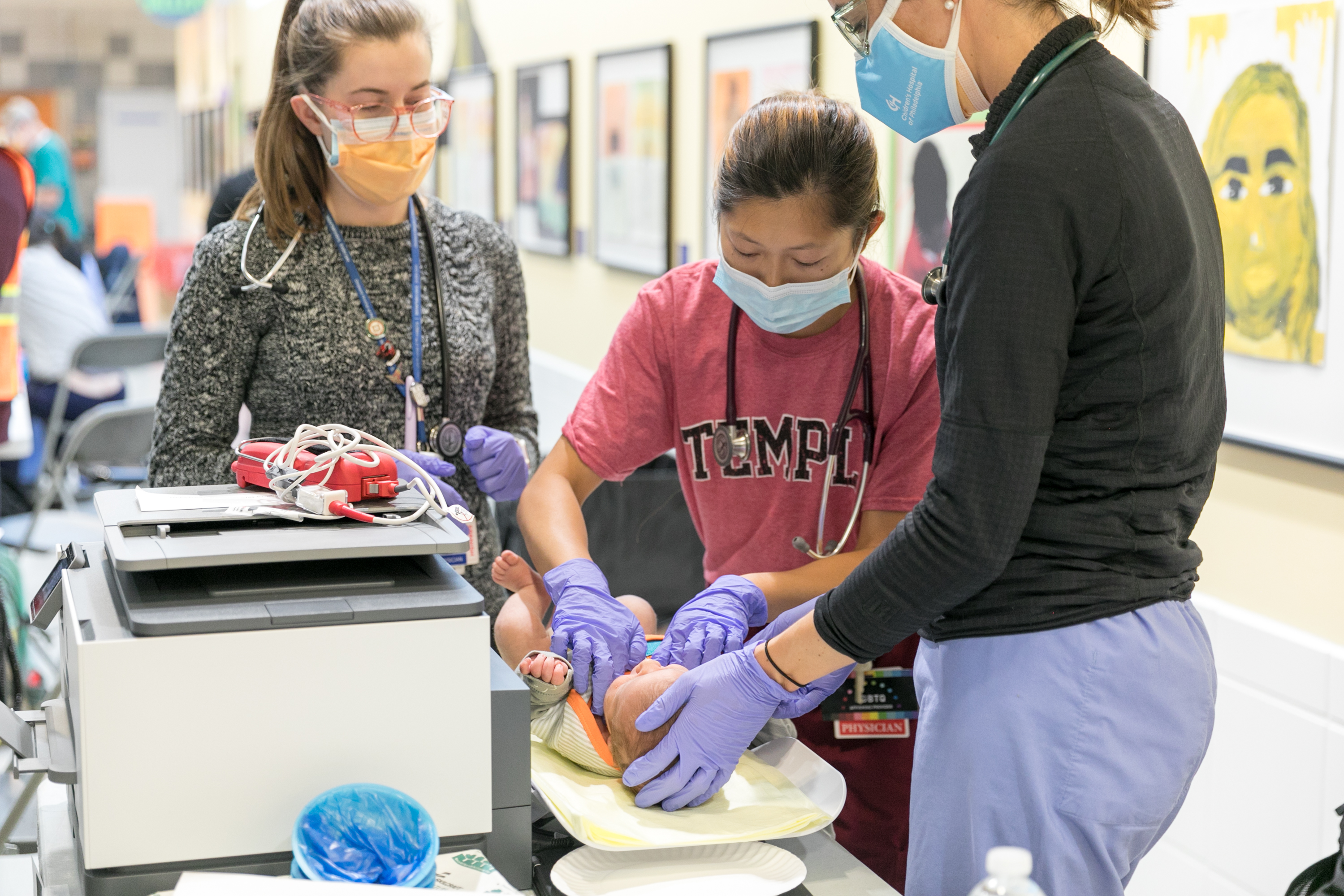 As of September 10, more than 11,500 evacuees had been processed at Philadelphia Airport. Soon after, the operation was paused.

The refugees and expatriates were first seen by U.S. Customs and Border Protection. They were then escorted to the terminal where the clinic is located. There, they were tested for COVID and screened for symptoms of communicable diseases. COVID vaccination was made available to them. They were asked, through interpreters, if they had any prescriptions that needed refilling and if they’d like to see a doctor for any reason. 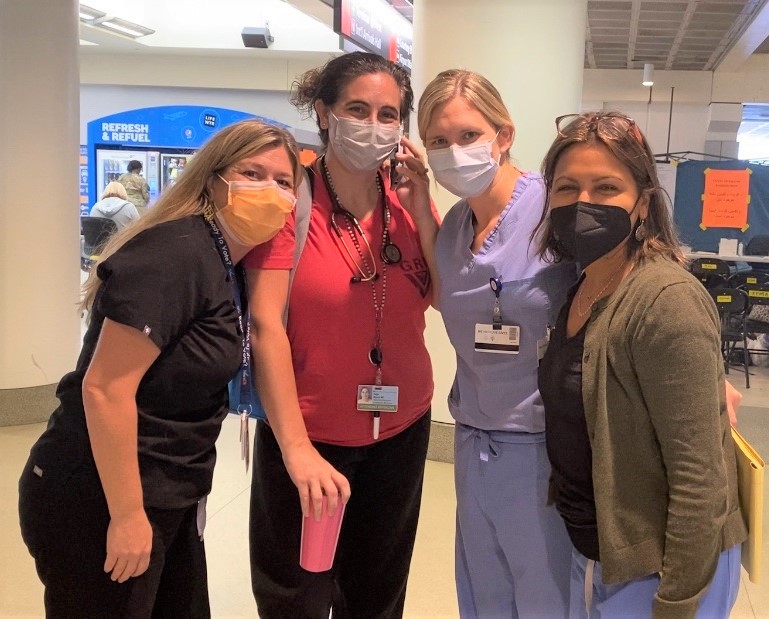 Temple’s Dr. Maura Sammon (far left) is pictured at the Philadelphia Airport with colleagues from CHOP and Jefferson.

Of the nearly 1,000 people treated at the clinic, only 35 required further treatment at a hospital, “which is incredible,” Dr. Sammon says.

“These families desperately want to stay together and move on with the process so that they can arrive at their final destination. Many have been in transit for weeks,” she says. “So, being able to treat them at the airport has helped them do that, while decreasing the strain on the city’s health systems.”

Dr. Sammon says the relentless dedication between individuals and agencies, including the Philadelphia Department of Health, the Centers for Disease Control and Prevention, and the U.S. Departments of Homeland Security, Defense, and State, to ensure families were treated with the utmost compassion made this operation “the most rewarding moment of my career.” 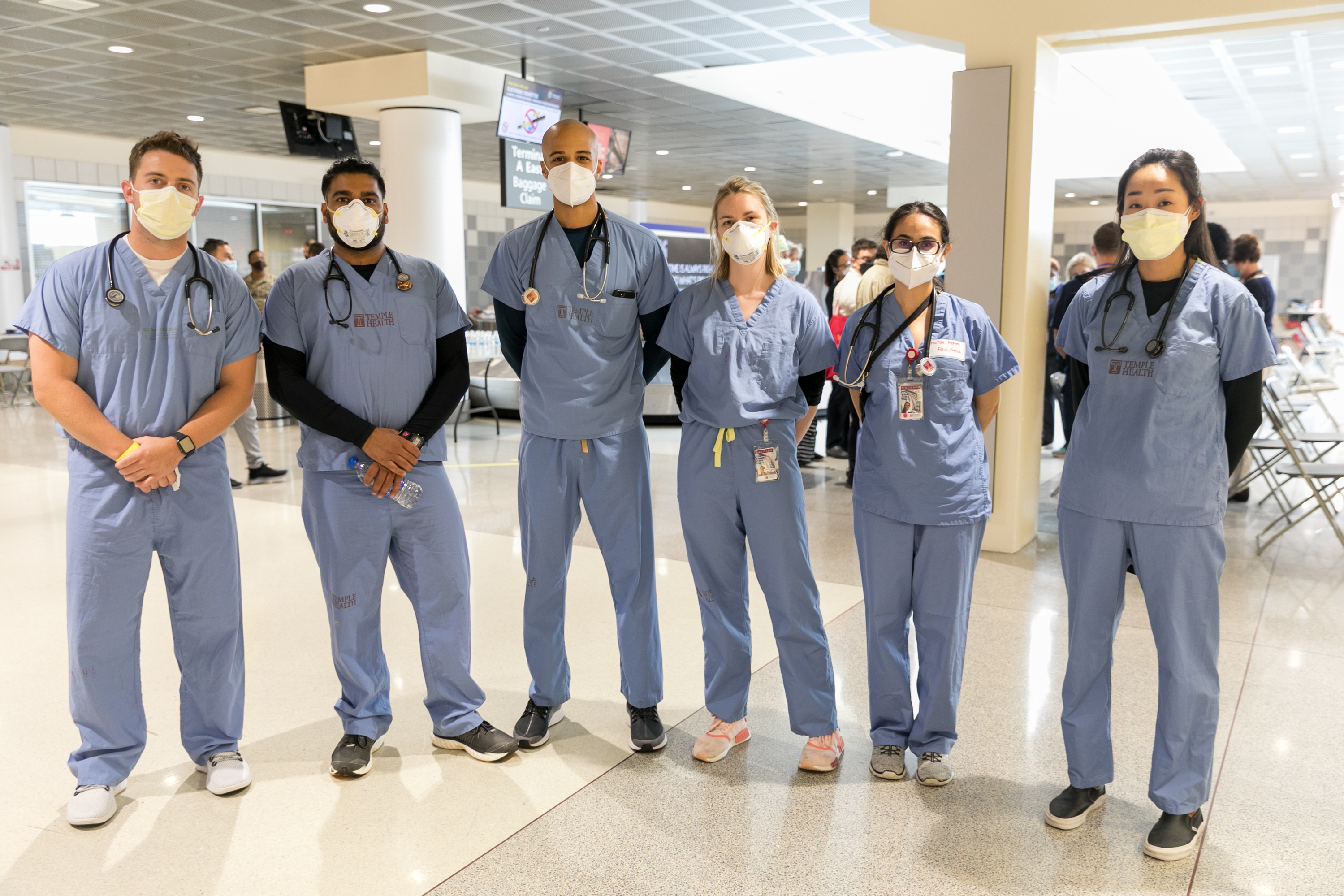 Medical students with the Temple Emergency Action Corps (TEAC) collected donations, made pharmacy runs, purchased, and delivered basic necessities for the youngest passengers getting off the flights, and pitched in at the medical screening and triage areas.

While everyone involved was keenly aware of the importance of keeping families together, Dr. McGinley says he didn’t feel the full weight of that intention until he was confronted by the real possibility of breaking up a family.

“It’s not until you’re treating a mother who may be experiencing complications from her pregnancy and she’s refusing to go to the hospital, jeopardizing both her health and her unborn child’s, because she’s terrified of being separated from her husband and her other children that you begin to understand all that they’ve been through together,” he said. “They’re in a foreign place. They don’t speak the language. They’ve made it to this point by physically staying together at all costs and following the process step-by-step. All they know is the next step. That fear is palpable, and we do everything we can to help reassure the families that they will not be separated at any point in the process.”