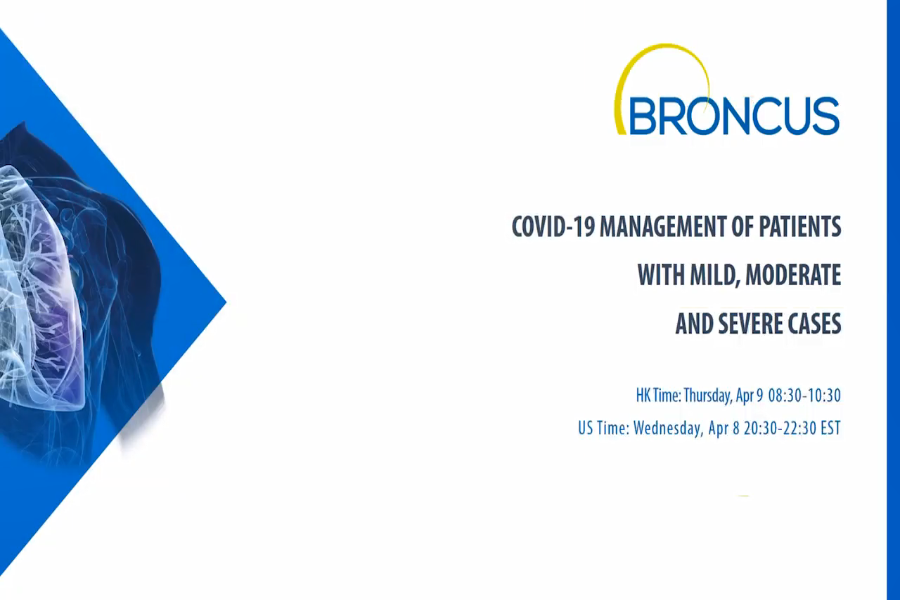 Watch the full webinar or read the summary of Dr. Criner's presentation below.

Global case rates: Countries across the northern hemisphere have been severely affected by COVID-19, starting in China and East Asia, followed by a heavy occurrence in western Europe, and most recently in the United States, with a large surge in infected and critically ill patients. The U.S. currently has the highest number of COVID-19 cases worldwide.

Global death rates: Although the number of cases is highest in the United States, the other countries lead in per-capita death rate from COVID-19. Spain and Italy have had more than 200 deaths per 100,000 people; the United States and some other western European nations so far have not seen this level of fatality (U.S. death rate is closer to 100 deaths per 100,000 people). Deaths are occurring not only among the older people considered to be most at risk, but also among younger people. The fatality curve is starting to flatten in Spain and Italy.

Projections and Observations on U.S. Cases and Deaths from COVID-19

The peak in the number of new infections in the United States overall may already have occurred; this will be followed by a peak in hospitalizations. The United States projected peak need for maximum health care resources (ICU beds and invasive ventilation) was approximately April 11. The peak in the number of COVID-19 deaths will occur somewhat later.

Social distancing appears to be having an encouraging effect. While the impact of this pandemic is unprecedented in recent U.S. history, the number of deaths may be less than the 100,000–200,000 people projected less than a week ago. If social-distancing practices are maintained at their current level in the United States through August 1, 2020, we may see the number of deaths decrease to 60,000.

However, the peak in the number of cases or deaths will not occur simultaneously across all regions. In some areas, such as parts of New York (including New York City) and New Jersey, the increase in the number of diagnosed cases has begun to slow down significantly; in others, such as areas of Michigan, Louisiana and Pennsylvania, the number of confirmed cases continues to double every 3 to 7 days (as of April 8).

In the Tri-State region and Philadelphia, we were, on April 8, still on the sharp rise of the curve. Peak number of cases was expected for the weekend of April 11–12. A peak in requirements for hospital resources, including the number of ICU ventilators, will follow. The death rate will hit its peak approximately 5–6 days later.

Despite a peak in the number of U.S. cases and hospitalizations in places like New York City, the death rate has not yet hit a plateau. New Jersey, Michigan, Pennsylvania, and Louisiana are still on the sharp parts of the curve and will not reach a plateau in deaths for a time—possibly one to two weeks from April 8.

COVID-19 can result in death not only in the elderly but in younger people.

Initially, COVID-19 was said to only affect patients who were older and/or infirm—older adults in nursing homes, those with comorbidities, etc. Cases from Asia and Europe have shown that this rule is not universal. As the disease becomes more prevalent in the United States, physicians are recognizing that even younger people—those in their 40s or 50s, or even younger—can be affected to the extent that they require hospitalization. At the time of the webinar on April 8, Dr. Criner described having three COVID-19 patients aged 19–21 in his care at Temple University Hospital.

Dr. Criner also described a 45-year-old patient seen at an outside center’s emergency room with minor COVID-19 symptoms. These included mild fever, some shortness of breath, and a cough. The patient was sent home, but a week later he presented at Temple University Hospital with ARDS requiring prone ventilation and intubation. He stayed in the hospital for approximately three weeks, and, fortunately, survived.

A major challenge facing the care team is making a rapid and accurate diagnosis of COVID-19. Using nasopharyngeal (NP) swabs for nuclear antigen extraction is problematic and has a significant false-negative rate. In the three weeks prior to April 9, Temple University Hospital treated 624 patients with COVID-19 disease. Yet, the hospital also saw a high percentage of patients with similar exposure risk and similar clinical severity of symptoms on CT whose NP swab did not detect COVID-19. If possible, patients who present with a classic COVID-19 profile on HRCT but negative-NP swab should be treated the same as patients with a positive-NP swab—they should not be sent home or removed from respiratory isolation.

This diagnostic problem must be addressed with more precise and rapid testing; diagnosis is needed within 5 to 15 minutes.

Many patients present with severe symptoms.

The first 110 COVID-19 patients treated at Temple were classified into clinical severity stages based on clinical radiographic and hemo-cardio-respiratory parameters. Approximately 80% of successfully staged patients had either severe or very severe disease on presentation at Temple University Hospital, requiring high-end respiratory care in the ICU to maintain their survival.

Takeaways for Providers and Hospital Systems

A note on triage for mechanical respiratory support.

Temple has implemented a triage protocol for ventilators that other facilities may find useful: when intubated patients have reached a level of stable ventilation, the high-end ventilator is removed and replaced with ventilators that have lower functional capacity. The more aggressive ventilation option is then used for patients who have a higher need for respiratory support.

Temple also has more than 100 OR and travel ventilators on reserve as well as home mechanical ventilators in preparation for the surge in cases in the coming weeks.

Although there has been a push for aggressive and early intubation to treat COVID-19, in Temple’s experience, intubation and PPV are needed only for approximately 14% of COVID-19 patients.

Others with severe disease can be managed with the judicious use of less-invasive options, such as HFNT or BIPAP. Combined with early treatment against cytokine storm, these less-invasive options can tide many patients through the tenuous early stages of the disease, and avoid the potential for increased morbidity that is always present for intubated patients.

Dr. Jason Gallagher spoke with Politico about COVID-19 treatments, including monoclonal antibodies, antivirals like Paxlovid and Remdesivir, and convalescent plasma, and new options.

The article highlighted the efforts of the Asian American, Native Hawaiian and Pacific Islander Interest Group to increase access to vaccinations in communities hit hard by the pandemic.